The statue was designed, financed and raised in conjunction with the City of Oslo and the sculptor Kirsten Kokkin, who is the daughter of one of the members of the Group, Sverre Kokkin.

“When we first heard about the Pelle Group we knew very little about them. But as we learned more about their heroic deeds, we quickly realized that this is a story which needs to be honored and remembered”, Samlerhuset founder and owner Ole Bjørn Fausa, says.

The Pelle Group carried out several crucial sabotage operations against German ockupiers during the end of World War II.

However, the leader of the group, Ragnar Sollie, was a member of the communist party and therefore the “Pelle Gruppa” did not recieve any official recognition from the Norwegian authorities until now, 70 years later.

The official ceremony took place at the Oslo City Hall before the statue was unveiled at the Aker Brygge, where most of the sabotage actions were carried out.

During the ceremony Samlerhuset was joined by veterans from the Pelle Group, Crown Prince Haakon, Oslo Mayor Fabian Stang and about a thousand other invited guests and dignitaries

Picture below: the Samlerhuset medal sold to finance the Pelle Group-statue. 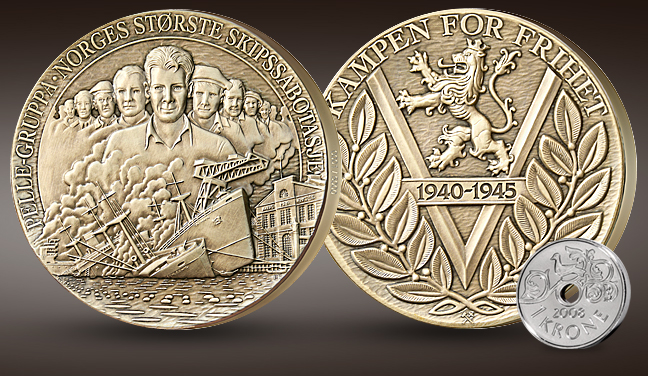