The Samlerhuset Group is a proud and licensed Fairmined partner, and we have a continuous cooperation with them from 2016 onward. We therefore know that the gold used in our products is fair, and that we contribute to a more transparent gold production worldwide. 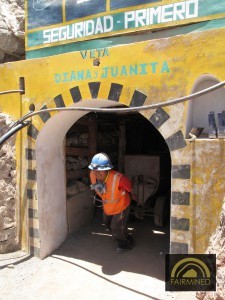 This  certified mine takes the safety of its workers seriously. They remind their workers of this in white on green above the entrance: “Security first”.

Fairmined is an assurance label. The label certifies that the gold you have bought comes from responsible small-scale mining organisations. To get this certification, a mine must show responsible social development an environmental protection. This means that both the workers, society and the environment benefits from the production. The Alliance for Responsible Mining created the Fairmined assurance label.

The need for responsible mining is great in the world. In many countries, criminal or terrorist organisations run the mines with intolerable cruelty. Many workers die prematurely because the organisations force the use of noxious gasses and chemicals in mining. In addition, several of these workers are in these camps as a result of kidnapping. Therefore, they are more slaves than workers.

The Fairmined assurance label assures the buyer that the gold is fair and that the purchase helps the local community.

When did Samlerhuset get involved?

In 2015, Samlerhuset and The Mint of Norway decided to support the Fairmined initiative.  Together, they produced the first certified commemorative medal in the world, the “Kongens Nei” medal (link in Norwegian). The medal commemorates the resolve of King Haakon VII in World War II.

They also suggested that the Norwegian Nobel Committee should follow this initiative. Therefore, the Committee decided that the first Nobel Peace Prize was produced in Fairmined gold in 2016. The Nobel Committee awarded the prize to the president of Colombia, Juan Manuel Santos. This was a double win for Colombia, as the gold itself came from a Colombian certified gold mine.

Who else are involved?

The Samlerhuset Group are by no means alone in their support for Fairmined. In fact, the arguably most famous supporters are Chopard and Kering. Chopard produce the Palme d’Or, the main prize at the Cannes Film Festival, in Fairmined Gold. Kering is one of the leading jewellers in the world.

The Monnaie the Paris, the French Mint, has minted commemorative gold coins in Fairmined Gold.

The Alliance for Responsible Mining reports that they are cooperating with mines on three continents, and that the desire for responsible gold is increasing around the world. Together, we can do our bit to change the world for the better.